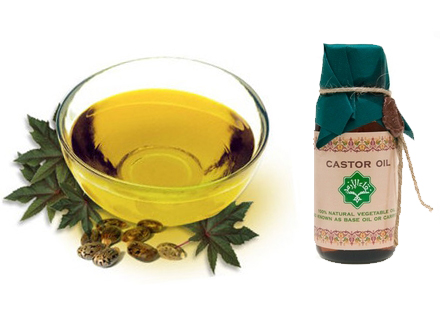 Nature takes care for women’s beauty and youth – in the vegetable world you can find the best means for skincare. One of such means is – castor oil.

Castor oil is obtained from castor-oil plant, from its seeds using pressing. Castor oil is a cheap, natural, long-term storage vegetable oil which is available in each pharmacy. Butter in large quantities contains ricinoleic glycerin acids – this determines its valuable properties, the most important of which: has high viscosity and low temperature of drying (-18 …-22C). As for viscosity castor oil surpasses sunflower oil by 18 times.

History of using castor-oil plant dates back to the days of ancient Egypt (3000 BC. E.). Remains of castor seeds were found in archaeological excavation in ancient Egyptian tombs. In Egypt, castor oil was used as a basis for ointments and creams. It was also used in religious rituals. Egyptians knew about the laxative properties of castor oil.

Wild castor-oil plant was used in ancient times throughout the north-eastern Africa. It was used as a general cosmetics tool. Africans even used castor oil for cooking – heat treatment neutralizes poisonous and laxative properties of oil. Oil was used for the processing of hides and leather products. Castor-oil plants were planted all around villages and plantations thus making a wonderful fence.

From Africa castor-oil plant spread to the Middle East and the Mediterranean coast. Castor-oil plant was mentioned by Herodotus, Diodor, Pliy and in the Bible. In India, Iraq and Persia castor-oil plant was also widely used. The Arabs derived the most resistant to arid climate types, with high oil content and with uncrackable boxes. In India, castor oil quickly became popular. It was used in cosmetics, for medicinal purposes and also for lighting.

The British supplied castor-oil plant to England already in the XVIII century. Thanks to industrial development a new way of using castor oil was opened. It was used as engine oil, for leather dressing, soap manufacturing, in cosmetics and perfumery industry.

Castor oil is a laxative. Doctors recommend using it for constipation and with poisonings (except fir poisoning with liposoluble substances: phosphorus, benzene, phenol). Castor oil also helps with hemorrhoids, cold and bronchitis. In addition, it is a part of the ointments and balms designed to treat wounds, burns and ulcers.

Castor oil is not only recognized by medicine, but it is also excellent cosmetic oil. It has been used for hair, eyebrows, eyelashes and face care. This is unusual oil: it does not form a membrane, do not dry and is well-absorbed and easily applied. In addition, castor oil good for fighting with small wrinkles. It is suitable to care for delicate skin, and age is used for the growth of eyelashes.

Castor oil is an enemy of warts, scars and skin outgrowth. It removes pigmented spots and whitens the skin. This oil does not only improve the appearance of the skin, but also feeds and mitigates it. Castor oil also promotes hair growth and eliminates dandruff. Turkish Red castor oil (sulfated castor oil) can be used as basic oil for mixing for the bath. It easily dissolves in water and leaves no oil rings.

Aphrodisiacs 0
Only roots of vetiver plant are used to make the oil. Way of production

Essential oils 0
Nowadays organic jojoba oil is a very fashionable remedy in cosmetology. It is a