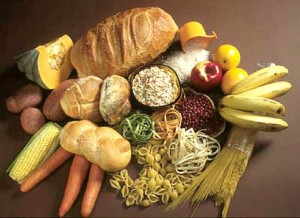 There are a lot of theories about how carbohydrates affect your fitness.  Basically they are complex sugars and usually occur in baked products, but also occur naturally in fruits and vegetables like potatoes and bananas.  This doesn’t mean you should shy away fruits and veggies, because there are different types of carbs.

There are simple carbs and complex carbs, and the complex ones are the ones you want to watch out for, because they’re converted to fat the easiest.  Fruit and vegetables tend to contain simple carbs, while baked goods like pizza and bread tend to be made of complex carbs.  Stepping back your complex carb intake can drastically affect the amount of hydrated fat on your body.

There are various diets out there, like the South Beach Diet, which prohibit the intake of carbs to lose weight.  The Atkins diet is another take on that same theory.  The basic idea is that if you don’t take in complex carbs they can’t be converted to body fat.  If your food can’t be converted to body fat, you won’t gain weight.  That’s not entirely true, but it kind of works.  I’m not saying it’s healthy though.

Alcohol is probably the most common carb out there and is the biggest culprit for gaining weight.  There is a reason they call it a “beer gut”.  As you drink beverages with higher and higher alcohol content the carb ratio goes down, but it never goes away.  Also remember the alcoholic drinks are very high in calories.  Some shots of liquor can have upwards of 150 calories!

Carbs and sugars also provide you directly with energy.  That’s why you see people who run marathons taking in a large amount of calories, most of which are carbs.  If your body is using the energy, they are the easiest form of food to convert.

When you’re going to the gym, if you eat a carb heavy diet about three hours before you go, you’ll feel more energized and probably perform better while you’re there.  It’s good to eat a larger amount of them in the morning and cut back on them at night.  This way you’ll have the energy for your day, but not convert them to fats while you’re sleeping.

Basically you need to remember that carbs aren’t as bad as some diets make them out to be, but they can be bad if you don’t moderate them.  Remember that they are in most foods and beverages – especially alcohol.  The easiest way to lose weight is to cut alcohol from your diet.  For some people it’s also the hardest thing to give up.

There really is a lot of science that goes into figuring out how many to eat and when you should eat them.  When you combine something complex like the science of consuming carbs with the science of drinking water or other consumption habits, it’s easy to get confused.  We’ll try to break down those barriers for you and make it simple.

Need more help figuring out all of this?  Just hit us up with your questions.