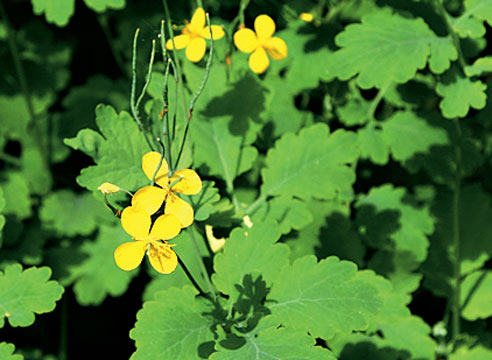 In medicine, the top part of the celandine plant is mainly used. Celandine is stored up during the blossoming period. Celandine herb should be gathered in dry weather. It is better to cllect the plants that grow in dark places. This helps celandine gather the greatest quantity of curative properties.

It is believed that the waxing moon is the best time for gathering celandine: in this period any plant accumulates the maximum healing properties. The best time is early morning, when nature is waking up. Celandine should be cut 5 – 10 cm above the ground.

Gloves should be worn, and the face should be protected with a wet gauze bandage. The fact is that celandine pollen causes a strong irritation of the mucous membrane of the nose.

When the celandine herb is gathered, it is supposed to be placed in the dryer. For this purpose, any well-ventilated room can be used, where direct rays of light do not penetrate. The herb is laid on the floor in a thin layer. In the process of drying, it is necessary to rearrange and to turn it. Unless it is done quite frequently, it will start browning and fogging off. Airing and frequent turning is necessary, so that celandine dries as fast as possible. It is important because in the process of long drying the beneficial juice simply vanishes.

It is even better to tie celandine in wisps (a few stalks in each wisp, but no more than 10. In this case air will dry it and it will be effective and quick.

Dried celandine has no smell, its taste is bitter and sharp. After drying the roots get dark-brown, almost black, on the fracture – yellowish or pinkish-brown.

Celandine, properly stored up, preserves its curative properties for 3 years. It is better to keep it in a dry room, having hanged it up and wrapped in paper (the upper part should be left open).

Celandine herb is often used in the greatest variety of forms: as decoctions, liqueurs and infusions, creams, oils. Celandine juice is stored up too.

Decoction is prepared in the following way: place some celandine herbs in enamelled saucepan, pour over cold water, bring it to the boil on low heat and keep on for some time. The duration of this process, as well as the proportions of water and the stuff depends on the particular case. Filter the decoction, pressing out all the liquid.

Celandine herb decoction has a bactericidal, calming, bile-expelling, diuretic, spasmolytic, anaesthetic effect. It can be used against ulcer disease and cholelithiasis, spasms of the pylorus of the digestive tract and gall bladder, in renointestinal colic, in urinary bladder diseases.

Celandine juice is one of the most effective remedies produced from celandine. All the healing properties of this miraculous plant are concentrated in it. During the blossoming period, gather leaves and stalks (even roots) of celandine and mince them. Place them in a glass container and put in the refrigerator for a few days (it will cause the juice to exude). Usually three days are quite enough. Then press the herb through gauze. You can prepare 1 – 1.5 litres of the juice from one bucket of the herb. After a while the juice starts fermenting, so don’t forget to discharge air from the container. After 2 – 3 weeks the fermentation is over. The juice, stored up in this way, can be kept in the refrigerator for a few years.

Celandine oil is mainly used for external application. Take dry celandine herb, chop it, place in a glass container and pour oil over the herb (so that the oil level is 2 – 3 cm higher than the herb level). It is desirable to use peach or apricot oil, but usual vegetable oil is quite suitable. Vegetable oil is necessary to warm in a water bath for 1 – 2 hours. Put the oil with the herb in a warm place for 30 – 60 minutes, then carry it to a cool dark place and hold it for a week. Don’t forget to shake the preparation from time to time. After 7 days, when it is ready, filter it through gauze, add pure oil (in the ratio 1:1) and keep it in a dark glass container.

Celandine is used as infusion due to its bactericidal action and the ability to slow down the growth of some fungi and even malignant tumours. It is connected with the fact that celandine contains a great quantity of alkaloids.

The infusion can be both aqueous and alcohol

The aqueous infusion is prepared in the following way: take the quantity of the herb, defined by the prescription, pour boiling water over it and warm in a vapour bath for 15 minutes. Then cool and filter properly. Before filtering allow the remedy to infuse. You can do even without a vapour bath, boiling water is quite enough. But in this case it is desirable to prolong the time of infusion. It is also good to infuse celandine in a thermos.

Celandine infusion can be prepared on vodka. Take the herb (fresh or dried), fill a half of a bottle or a jar with it and pour vodka over it. Let the mixture infuse for two weeks. Then dilute the obtained infusion at a ratio 150ml of the infusion to 350ml of pure vodka. Take three times a day before a meal. Remember that the infusion is very strong, so if you need to take it internally, start with the smallest dose (5 – 10 drops) increasing it every week by 10 drops.

Aqueous infusion is much weaker than alcohol one. The reason is that water dissolves only the salts of alkaloids that celandine contents, but alcohol – the very alkaloids. Therefore alcoholic solution is stronger and more effective.

Aqueous infusion has one – very important – advantage: it is less dangerous than alcohol infusion. In order to avoid poisoning, water infusion is recommended. But the usage of alcohol celandine infusion is reasonable only in the cases when possible harm is less than benefit that can derived from it.

Even in the case of cancer diseases when the man is ready to use any remedies, and due to the critical situation, it seems to be an idea made in heaven to use alcohol infusion, still it won’t be out of place to think about the general emaciation of the organism to which any “blow” is dangerous.

Celandine ointment is prepared on vaseline, lanolin, seam or mutton fat. Ordinary baby cream can be used as a base. For the ointment preparing, it is better to use either celandine juice or dried herb that is preliminarily well ground (a coffee mill can be used for this purpose). The proportions in which the components are mixed depend on the definite case and disease. However, the usual ratio is 1 part of the ground mix and 2 parts of the base-mix. The fresh juice is mixed with the base in the proportion 1:4. Carbolic acid (0.25%) is added to the ointment, so that it doesn’t get mouldy.