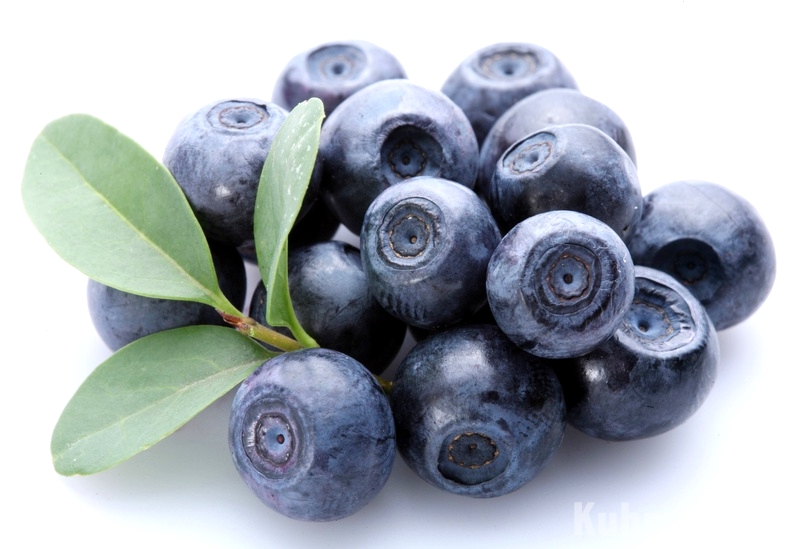 Scientists found that blueberries can restore our body functions and powerfully counteract ageing (and even rejuvenate the body).

The destructive role of free radicals is well known. It is free radicals that make a crucial contribution in the process of organism ageing. Such substances as antioxidants are able to fight quite successfully with free radicals. Blueberries are the richest source of the so-called anthocyanidins, which is one of the strongest natural antioxidants.

Blueberries extract showed the ability to increase the quantity of dopamine in the brain. This compound regulates the most important processes in the brain, and, as we know, the younger is the brain regulating all the types of metabolism in the organism, the younger is the organism itself. The increase of dopamine, as for instance, promotes working out of somatotropin (growth hormone) that is responsible for renewal and rejuvenation of cells of the whole body.

Another important property of flavonoids found in blueberries is their ability to raise the level of glutathione. Glutathione is the most important endogenic antioxidant, as its made by the organism itself. Glutathion is a powerful protector of nervous tissue and also an effective neutralizer of chronic inflammation that is a substantial factor of all main diseases connected with ageing.

Victims of Parkinson’s disease have a low level of glutathione. Now it is believed that only half a glass of blueberries per day can prevent Parkinson’s, Alzheimer’s diseases, as well as others, giving a lot of suffering both to the patient and his relatives.

Other compounds (phenols) can stop the growth of pathologic blood vessels. It is one of mechanisms through which the given substances can prevent the growth and dissemination of tumours.

And finally, in one of experiments an unprecedented result was achieved. With the help of blueberries extract and vitamin E, the advance of cataract was stopped (it leads to blindness) in 97% of cases.

In another experiment blueberries extract improved eyesight of 75% of short-sighted people.
Thus, the abundance of special substances contained in blueberries make this berry a unique remedy for long life and prevention of many diseases.

To get the above effect, one should eat at least half a glass of bilberries per day. The effect will be more profound if blueberries are eaten on an empty stomach (30 – 60 minutes before a meal) drinking after 150 – 200ml of water.

In the summer you can pick blueberries or buy at the market. But what’s to be done in the season when blueberries doesn’t grow and isn’t on sale (though seldom you can buy it in a shop).

The first option is to store up the needed quantity of berries for summer. It is necessary to freeze or to dry at a minimum about one bucket of berries. 100g per day, 30 days and 4 such courses per year – it is 12kg of blueberries.

Another option is to use extracts, admixtures, etc. made of blueberries. As for instance, blueberries extract pills that are recommended to take for the eyesight improvement are on sale. It is difficult to say what quantity of such extracts should be used; apparently, 10g per day.

You can also take various blueberries yoghurts and jams. But in sufficient quantities, on a regular base (30-day-long courses).

As you can see health benefits of blueberries are immense so I would suggest next time you are in the shop get some blueberries in your shopping basket!

0
Like this post? Please share to your friends:
Related articles
Healthy living 0
If you have any kind of foot or ankle pain or notice anything about
Food 0
It is well documented that excessive consumption of sugars leads to oral erosions and
Healthy living 0
People who want to maintain a positive mindset and productive lifestyle should know that
Healthy living 0
It’s normal to have a few bad habits. Most of us aren’t perfect. However,
Healthy living 0
Procrastination precludes people from making the lifestyle changes that would lead to more productive,
Beauty 0
Routine dental care is relatively affordable for most families, but needed extensive dental procedures