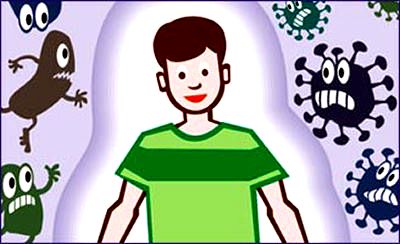 What is the immune system? The immune system – is a natural defense mechanism of our body. Immunity maintains stability of internal environment, eliminates the foreign influence of infectious pathogens, chemicals, abnormal cells, etc.

The term “immunity” appeared because of a Russian scientist I.I. Mechnikov and a French microbiologist Louis Pasteur. Initially, immunity was understood as body’s insensitivity to infectious diseases. The immune system – is the body’s ability to resist and get free (translated from Latin) from many adverse factors that are affecting the body and causing various diseases. Get free from substances bearing alien genetic information.

Immune system is directly involved in bringing harmful chemicals out of the body. These protective features are provided by the properties of the skin and mucous membranes, immune system cells, the coordination of physiological and biochemical processes.

The main objective of antibodies and lymphocytes is an immediate response to organism infection. Before the infection can multiply and cause diseases, they must find and eliminate it.

Thus, the immune system is a natural protective reaction of the organism, protecting it from any harmful alien micro-organisms and cells. This reaction raises the immunity to diseases. The immune system fights with the alien organisms – bacteria and its toxins, viruses, protozoa, parasites, donor tissue, mutated own cells (for example, cancer) and etc.

There can be two types of immunity: congenital and acquired. Congenital (specific) – is insensitivity associated with biological (hereditarily fixed) features of the organism. Acquired immunity is immunity to infectious disease that originates during life. Duration of protection of the organism after suffering diseases is different.

There is natural and artificial acquired immunity. Both forms may be active when the body itself produces antibodies after an illness or active immunization. Passive – antibodies are artificially introduced during the passive immunization, for example, when introducing antidiphtheritic serum or with transferring to the fetus from the mother through the placenta, or to the child through breast milk.

Active immune system is stronger and more long-lasting. For some diseases (like smallpox), it is active all your life. For others (measles, scarlet fever, etc.) – stays for many years, but is not inherited. Passive immunity begins working in a few hours after the antibodies were injected and continues to operate from 2-3 weeks to several months.

The main objective of the immune system is to distinguish between “friendly” and “hostile”. All the “hostile” cells are to be destroyed; thus “friendly” cell well-being is ensured. But, in reality, everything is much more difficult. When the effects of certain disease-causing agent start harming, the body examines it and produces a specific form of immune defense. But not only it produces, but also remembers the effect of the so-called idiotypes. The body remembers even dozens of others similar by the effect, preparing for the upcoming battles for human health. Due to this, the body is forming a huge network of idiotypes, immune radicals or groups.

Idiotypes – this is the impression of the organism for the external enemies, so the content and coherence of interaction of idiotypes determines the effectiveness of the immune system. In addition, due to violations the immune or autoimmune diseases may occur. Then the immune system may perceive the “hostile” as “friendly” (this happens in the development of cancer). Or rather, “friendly” as “hostile”

And if during the immunodeficiency the body cannot resist hostile – alien agents, then as a result of autoimmune disease the immune system due to violations takes their own cells, proteins, tissues for the hostile – alien cells and begins destroying them. Such diseases include, for example, rheumatoid arthritis (joint and connective tissue destruction), multiple sclerosis (destruction of nerve fibers) and psoriasis (destruction of skin). However, immune diseases, due to the fact that it has no clearly defined forms of expression, are more complicated to spot.

More often the steep decline of immunity arises during stress and heavy loads. In high risk group there are people whose professions in some ways connected with this.

The scientists estimated that the loss of a close relative or a loved one reduces by ten times the possibility of killing cancer cells that appears in the body or removing toxic substances and fighting the bacteria. Usually these people are described as: “He has aged within two days.” It is worth noting the violation of the immune system during the surgical operations. This is stressful for everyone; the body is already weakened and in the period after the operation the immune system more than ever needs help and support, thus immune system boost is required.

Immunity in newborns and infants is very imperfect, so a big role in protecting a child aged 6 to 12 months plays breast-feeding and prevention of dysbacteriosis. Older people also are at risk.

Under the threat are also people who are in connection with the specifics of their work cannot maintain the sleep, food intake and physical activity schedule.

Bad habits such as smoking, alcohol abuse can also (and quite significantly) affect the immune system.
The main signs of damage of the immune system are frequent relapses of chronic or catarrhal diseases, which cannot be treated. But this is not enough to suspect immune deficiency. Immunological tests are needed to be held when all these troubles occur despite appropriate and timely treatment.